To develop a three dimensional cell structure that closely resembles the human gut as a means to model bowel disease.

Our research is centred on understanding how bacteria-host interactions in the gut increase the risk of disease. We have shown that enterotoxigenic Bacteroides fragilis colonization of the human bowel occurs more often in patients with colorectal cancer than in healthy controls. Likewise, there is evidence that humans infected with Campylobacter jejuni may be at increased risk of developing Crohn’s disease. However, we do not yet fully understand the mechanisms that link carriage of these bacteria to increased risk of disease.

Single crypts or stem cells derived from the small intestine or colon can be expanded ex vivo over long periods to generate epithelial structures that closely resemble the self-renewing crypt-villus architecture of the gut. These organoids, which contain all differentiated types of cells and grow as three-dimensional structures, are essentially “mini-guts”. Accordingly, they potentially provide a model system of the respective niches that these (and other pathogens) colonize throughout the gastrointestinal tract to help us better understand specific host-pathogen interactions.

We have ethical approval to grow mini-guts from mouse and human biopsies. The biopsies will be digested with EDTA and then fractionated to give a crypt-rich preparation that will be cultured on Matrigel in defined medium. Once the organoids become established, they will be maintained in a manner similar to that used for the ongoing culture of cell lines. The advantage of organoids over cell cultures is that the former will provide a near physiological ex vivo model of the gut that can be monitored in real time.

We propose to expose the organoids to bacteria and/or potential therapeutics to determine cell-specific host-pathogen responses. Specifically, we will use cell proliferation, markers of apoptosis and evidence of intestinal phosphatase activity to assess if an infection and/or therapeutic has a measurable effect of cell differentiation and therefore the rate of organoid growth. We will also extract RNA from the cells for quantitative analysis of those genes we are interested in. In addition, we will measure intestinal alkaline phosphatase activity in situ in organoid-derived cell homogenates as a measure of innate immunity. 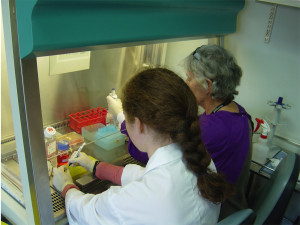