Bowel cancer affects the large bowel, which is made up of the colon and the rectum. It is also known as colorectal cancer. Bowel cancer is a growth of abnormal or malignant (cancerous) cells within the lining of the colon or rectum. 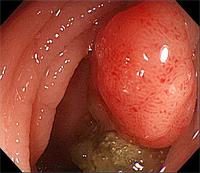 Polyp in the colon

Most bowel cancers develop from polyps (overgrowths of cells in the lining of the bowel). If these cells or polyps aren’t treated, the growth can cause a blockage within the bowel and/ or spread through the lining to other parts of the body. This spread is called metastatic bowel cancer. Colonic polyps or adenomas Colonic polyps or adenomas are abnormal growths of tissue (clumps of cells) that protrude into the bowel from the mucosal lining of the bowel wall. They normally look like a bud on a stalk but may also be flattish or resemble finger-like projections.

Polyps/adenomas can usually be found through a colonoscope (a flexible tube passed into the bowel via the rectum). If detected early, they can usually be removed. Although most polyps/ adenomas are harmless, some have the ability to change over time to become malignant.

Most early stage polyps/adenomas do not cause symptoms, though some may bleed. They are often detected incidentally as a result of investigations for other bowel disorders. If you have had a polyp/adenoma removed, you may need to have follow-up colonoscopies. This is because there is a possibility they could return over time. Doctors must assess the size of a cancer and whether it has spread beyond the primary (original) site before deciding on a particular treatment plan. The system they use is called staging. This involves a series of investigations that may include blood tests, CT (computerized tomography) scans, MRI (magnetic resonance imaging) scans and chest x-rays.